At 20 weeks pregnant I heard my parents were planning a holiday to Zante. I was insanely jealous! I’d not had a holiday in about a year and was suddenly very aware that in a few months I’d forever be travelling with a child, so naturally I started dropping all kinds of hints…

My parents caught every hint flying around (it was impossible not to) and invited me along! There was a spare bedroom and all I needed to do was book a flight and pack. I was on my way to Greece! 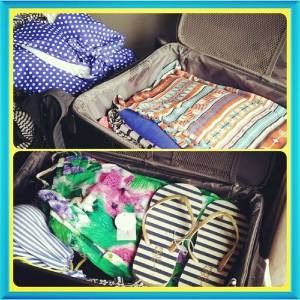 The only concern was my hips. I’ve suffered from SPD since I was 10 weeks pregnant – it’s a condition that a lot of people get but for some unlucky people like me it can be crippling. I’ve been signed off sick with it since 18 weeks and have been off work ever since. At it’s worst, I couldn’t walk, get myself up the stairs or even to the toilet at home and most days I just lay on the sofa and cried. I really had it badly which made me even more excited about holiday – I was just very concerned about how I was actually going to get there!

I booked myself in for disability help at Gatwick airport and just hoped that from there on, the Greek heat would help my hips. I can’t recommend the disability help at Gatwick enough – everyone was so helpful, efficient and couldn’t do enough for me. I was already in a lot of pain from the car journey, but once through security I got a lift in the disabled golf buggy to the boarding gate, then had help on to the plane and lots more assistance from there, including help at the Greek airport too. Fantastic service.

So, I’d somehow managed the journey. We picked up our hire car and set off to find the villa. My parents had booked into a fantastic family run group of villas called Porta Del Mar. We arrived at lunch time and were welcomed with a fantastic lunch of vine leaves, tzatziki, bread and olives. Amazing! 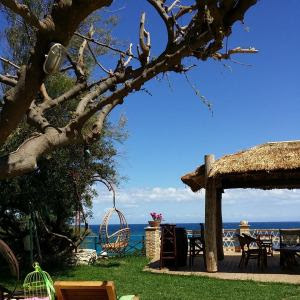 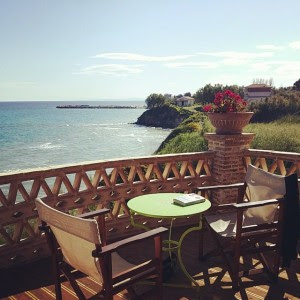 The villas were in a horseshoe shape and there was about 5 or 6 in total. We went in April, so only a few were full which made it lovely and peaceful. The family were lovely and so welcoming – plus they had an unbelievable resident chef called George. We wanted to bring him home with us, his food was to die for! If we wanted moussaka, he made moussaka. If we wanted kleftiko, he made kleftiko. The food was definitely the highlight of my stay! 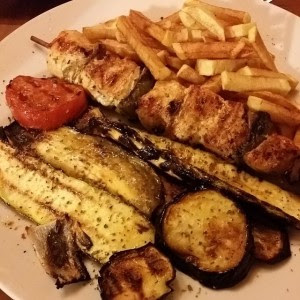 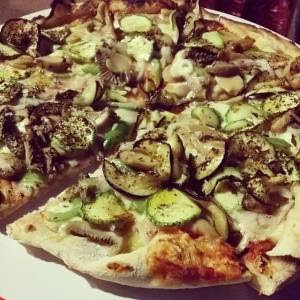 Homemade pizza made in the outdoor pizza oven 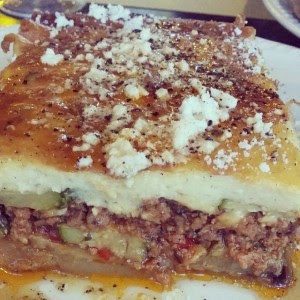 The most amazing thing of all was that by the second day, my hips had improved massively. It really must be true what they say about living abroad with arthritis and joint problems, as I’d been in agony for months and after travelling the day before I was expecting to be in absolute pieces for the first few days, but for the first time in months I could walk with only a slight limp! I soaked up as much sun as possible and really, seriously enjoyed the short break from the pain. It was still definitely there, just not quite as horrendous as usual. I even managed to walk down the steps by the villas onto the beach to have a dip! 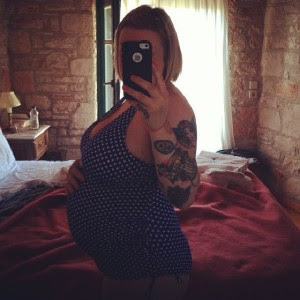 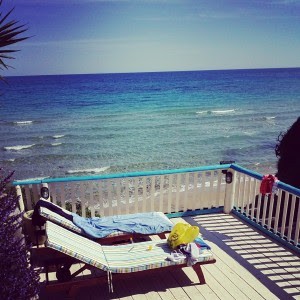 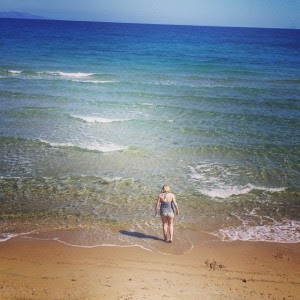 I was 25 weeks when I flew to Greece and I did get a lot of comments before I left, as well as at the airport and in Greece about being brave travelling that far into my pregnancy. To be honest I didn’t once ever worry about it. Maybe I should have done as we were on an island without a major hospital, but I had no concerns about going into labour that early or about flying so I felt happy to go away and enjoy my last peaceful holiday. 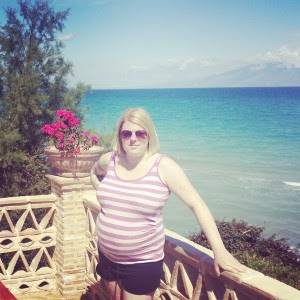 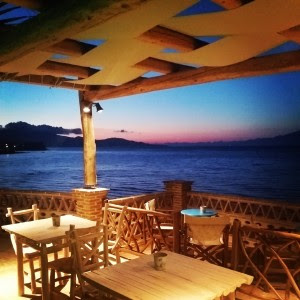 Now, the person we should have been worried about ending up in hospital was my mum. The day before we were due to fly home she fell down a kerb and broke her ankle! Dad took her to the local hospital and they arrived back a few hours later with x-rays, a half-leg cast and faces that didn’t know whether to laugh or cry.

I phoned the airline and found out that they needed to buy an extra 2 seats for the journey home, as the doctor told mum she must travel with her leg raised. £200 later we had extra seats and a whole aisle just for mum. Fortunately the insurance would cover the cost! Mum hates attention, so the fuss at the airport made her pretty grumpy! My dad laughed as I had disability help too, which meant he was accompanying 2 of us in wheelchairs with staff helping to push and crutches tagging along behind – we were quite the sight.

Once home my SPD got worse again, but fortunately as of a few weeks ago when the baby changed position, it has eased a bit again which is a huge relief.

With all said and done we had a fantastic holiday. If anyone is having second thoughts about travelling when pregnant or going abroad at 25+ weeks, after my own personal experience I would say go for it. It was great and I had no cause for concern. I’m so glad I did it as I really made the most of my last break in the sun before the next 18 years of building sand castles and not being able to finish a book! 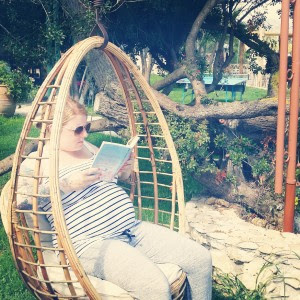 As much as I enjoyed our 10 days in Greece, there’s nothing quite like getting home to your own bed, is there?! I’m now 36 weeks pregnant, fully relaxed after my holiday and so excited for our first baby to arrive. Not long now!!

Hannah Leber is a lovely muma to be who blogs over at First Time Mummy – a family and lifestyle blog. Hannah and her hubby Grant are expecting their little IVF miracle in July – eek not long to go now! Follow her through her journey from nanny to muma with lots of lovely lifestyle bits in-between! Twitter – @FirstTimeMummy_
Facebook – First Time Mummy

I chat about all thing female empowerment, spirituality and positivity